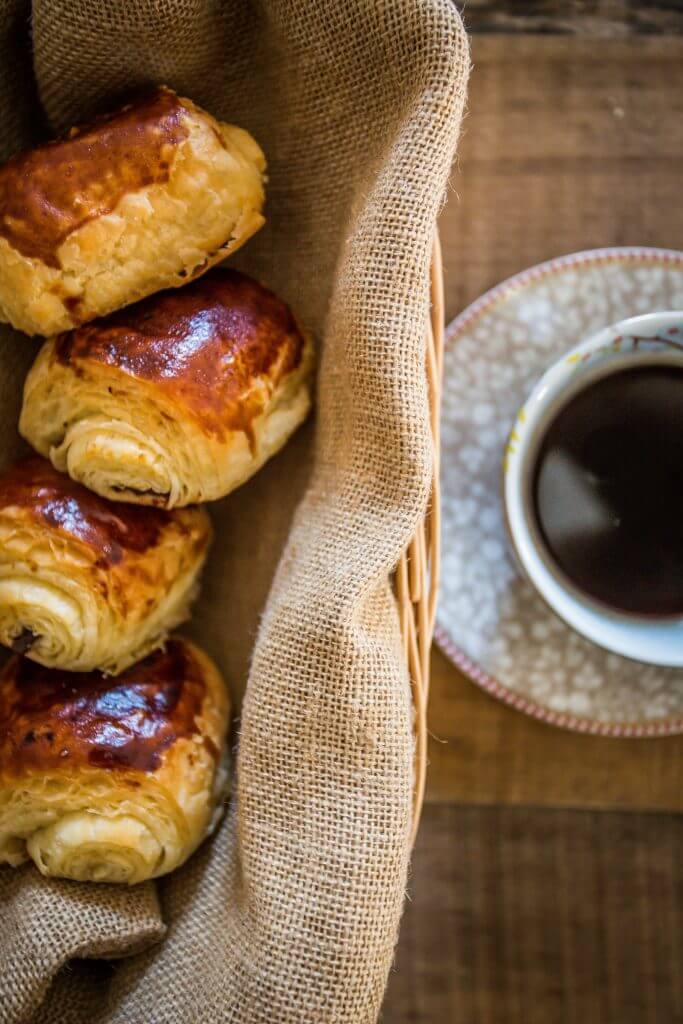 The white & pink checkered tablecloth, a cup of hot, intense americano, and a little basket full of croissant or pain au chocolat.

I don’t ask for anything else, while I think that I’d like nothing more, on Saturday morning while I go downstairs on my way to the kitchen. I open the shutters and press the button of my beautiful white kettle, with its sinuous profile, and I sit on the stool of the large oak table waiting for the gurgle of the boiling water.

To me this image represents absolute peace, a place where to each simple, individual action I can allocate its natural time, without the turmoil and rushed gestures typical of the weekdays.

However the reality is that on the table there is almost everything, with the exception of the freshly baked pain au chocolat.

For those an extra half hour wouldn’t be enough. They would require an early rise at ungodly hours, even on a Saturday. Therefore I usually fall back on Martha Stewart’s quick pancakes, which I happily drown in maple syrup. Less mouth-watering than the pain au chocolat, but still an awful lot better than the so-called “golden rusks with a thin layer of jam”…. now, that’s just sad.

And so, some time ago, during a thorough image research on Instagram of inverse puff pastry, I came across the recipe of Miss Dodo Fairy, a lovely French mum with two great passions: her three children and puff pastry in all its variations.

I was bewitched by her blog from a visual point of view: no tricks, all natural; something I consider the strongest proof of honesty and unbelievable self-confidence, a sign of excellent know-how.

I imagined Doriane – this is her name – while baking loads of golden, crispy croissant, while her children run around the kitchen. I could see her uploading a picture on her profile between a dishwasher load and a quick wipe of the counter, wishing “tous le monde” a happy breakfast.

I immediately became friend with Doriane, because I love to learn from whomever has a lot to teach, and no presumption of doing it.

I studied the recipe straight away because it’s seriously simple, quick and incredibly light, with just 75 g of butter for 8 croissants, or pain au chocolat, depending the way in which you’ll decide to cut and fill them.

Once you get the right ingredients, you’ll need about 15 minutes to have dough and butter ready. Then leave everything in the fridge for one night or more, depending on when you’ll decide to turn on the oven.

And while I write this, my mouth is watering once again, thinking that Saturday is getting closer. 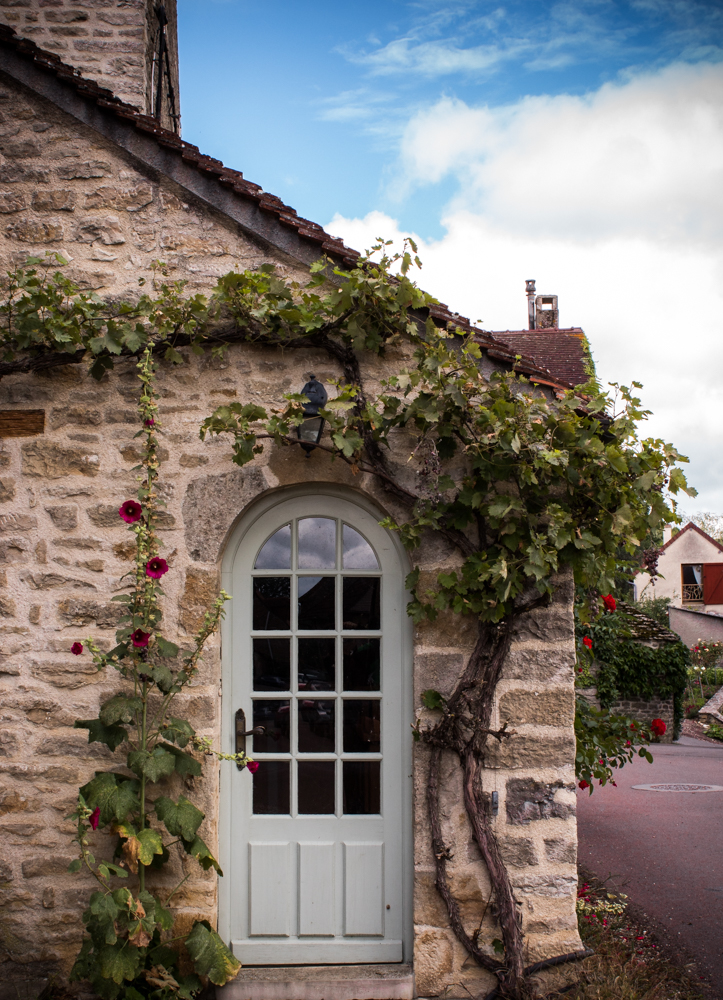 1. Use very fresh yeast; both the water and the milk must be really cold (straight out of the fridge)

2. The butter: you may struggle to find “dry butter” (also known as “de tourage” or in the US “European style”), i.e. butter that has a higher percentage of fat and therefore less water. A different type of butter will significantly complicate your work because it will tend to melt easily during the folding process, thus compromising the final result. Personally I love the smell and texture of  Corman butter; however I still find it difficult to source it – it’s only sold by specialised distributors near where I live and only in 2 kg packs. In order to avoid too much hassle, you can use this small trick I learned from the Master Montersino: when you’re in front of the fridge counter, before picking your butter, slightly press its surface with your fingertip; if it’s hard enough then it’s probably suitable. If you don’t want to waste even a second examining butters then go for the Lurpak. 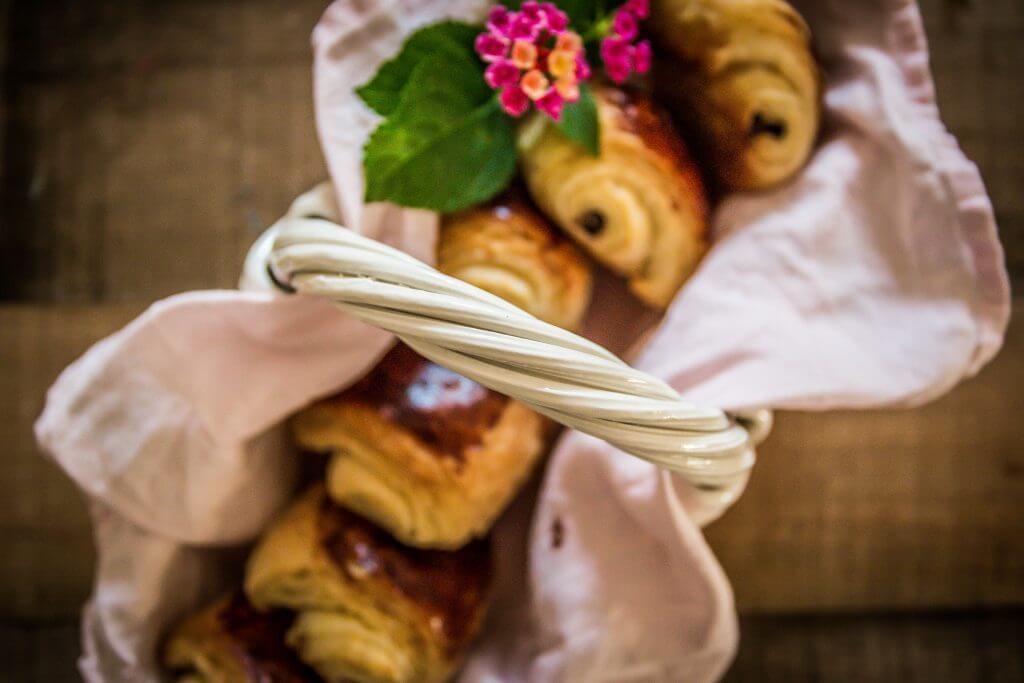 In the food machine bowl pour the salt and then the sugar. Cover everything with flour. Crumble the yeast over the flour then cover with milk and water.

Mix for approximately 10 minutes at the lower speed. Once done, move the dough into a bowl.
Cover with cling film and leave to chill in the lower shelf of the fridge.

Flatten the butter – you can gracefully beat it up too – with a rolling pin: you need to obtain a rectangle of approximately 13X8 cm. If required, use a spatula to press on the sides and keep them straight. Put it back in the fridge and forget all about it at least for one night 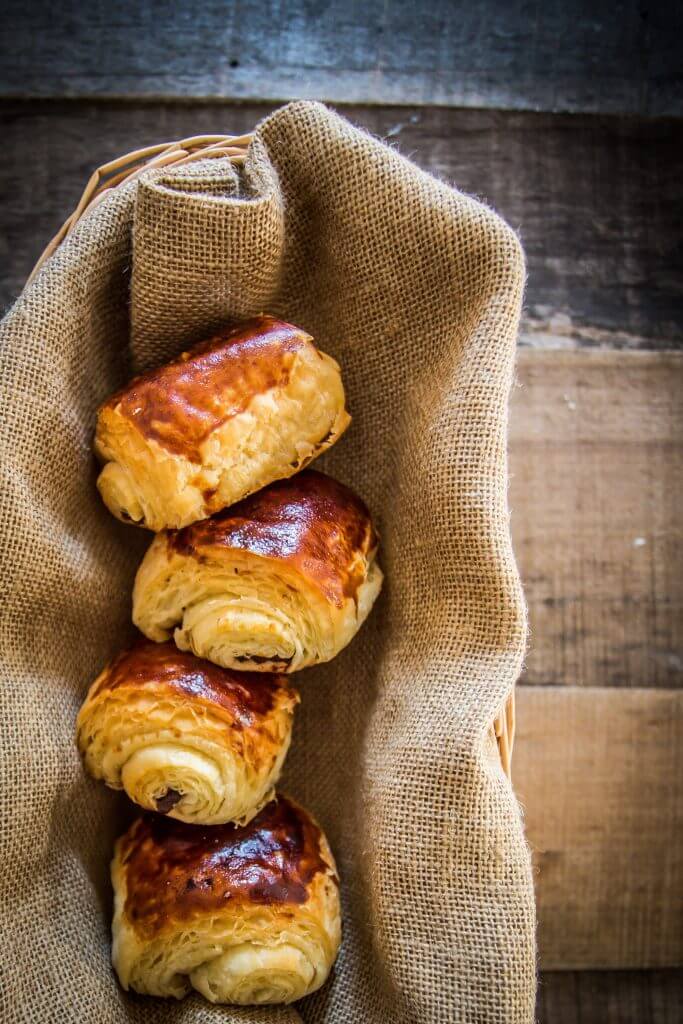 The following morning, remove from the fridge both the dough and the butter. Roll the dough lengthwise: it must be twice as long as the butter and slightly larger (approximately 1 cm on each side).

Place the butter at the centre. Fold over the butter first the sides of the dough (the 2 cm that stick out), then the top and bottom part. In this way, the butter is fully enclosed inside the dough.

Roll again the dough lengthwise; be careful, especially at the beginning, and work very gently, so that the butter won’t break down but will slowly flatten together with the pastry. Continue to roll until the dough is approximately 1 cm thick.

Now complete a double tour, folding the top and bottom part so that they almost meet in the centre, and then folding into two; in this video (or in Doriane’s pictures) you can find a good tutorial:

Turn the dough onto the counter so that the opening is on the left hand side. Roll it again lengthwise until it is approximately half centimetre thick. Complete a “single tour”, i.e. fold the dough into three: fold the bottom side bringing the edge to the centre, so that only one third of the pastry remains uncovered, then fold this remaining upper part over it, as shown in this video:

Wrap the dough in cling film and leave to chill in the fridge for at least 1 hour.

Then, remove from the fridge; again placing the opening on the left hand side, roll it into a rectangle approximately half centimetre thick. Define the edges using a knife or a pizza cutter, to obtain a uniform, regular shape. Along the edges you should be able to notice the layers of butter and dough.

Finally, cut into rectangles and place on each side chocolate chips, or a thin string of chocolate. Roll each rectangle and place it – the closing side facing down – on an oven tray, lined with parchment paper.

Leave to set for about 2 hours at room temperature (around 22 degrees; if it’s warmer then reduce the time).

Pre-heat the oven in fan assisted mode to 200° C. Brush the pain au chocolat with a bit of egg yolk and bake for 10/15 minutes, regularly checking the progress to verify when ready.

Remove from the oven and switch on the kettle! 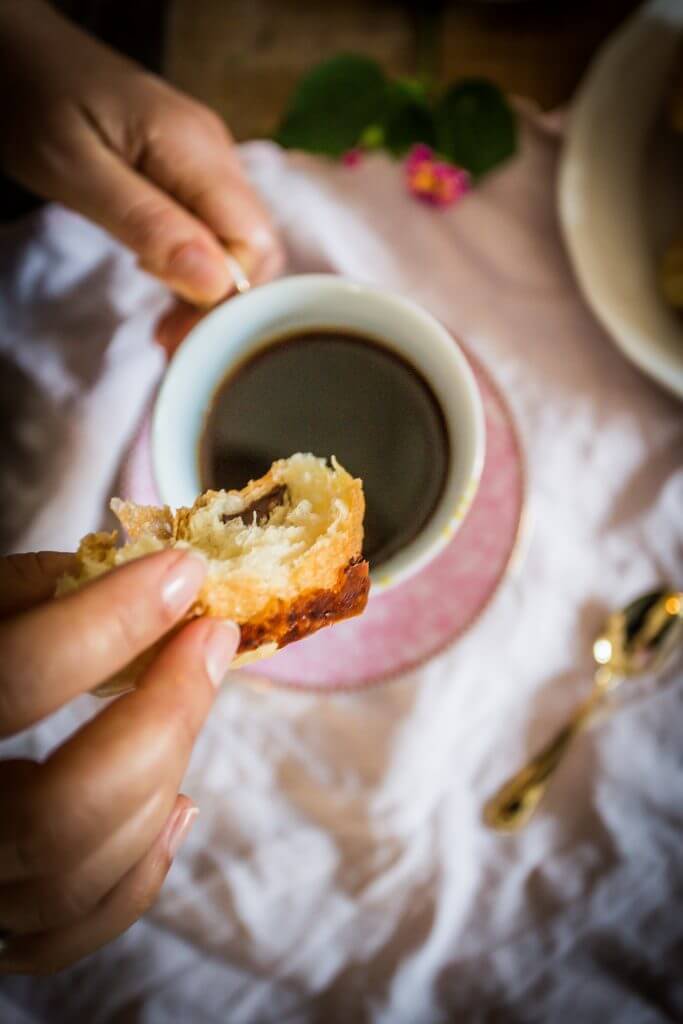 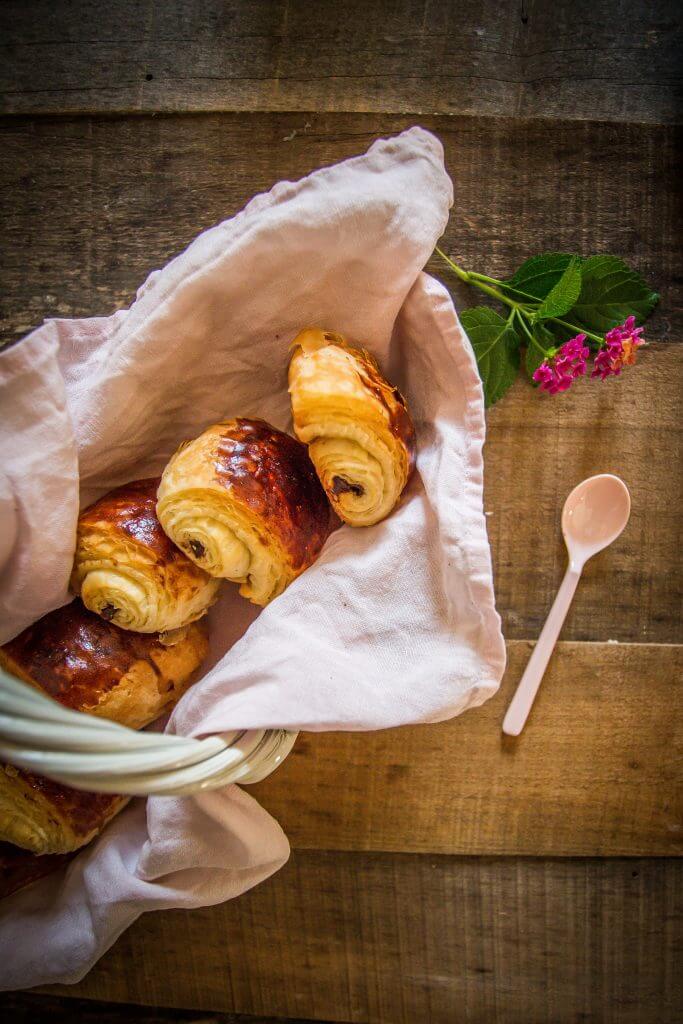 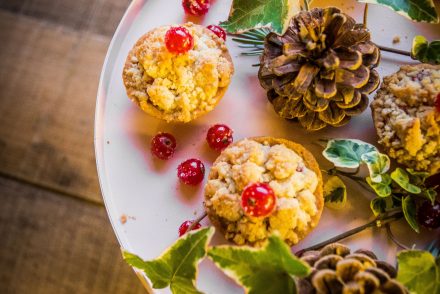 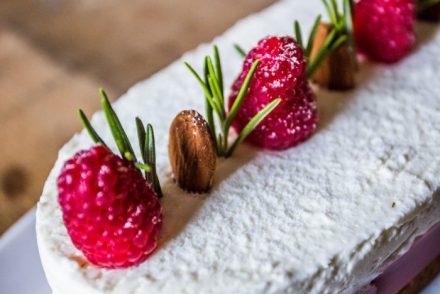 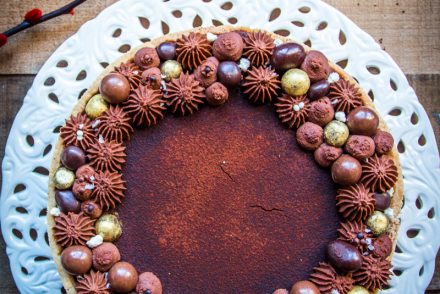 Torta Barozzi of Vignola : the orginal recipe is just one.