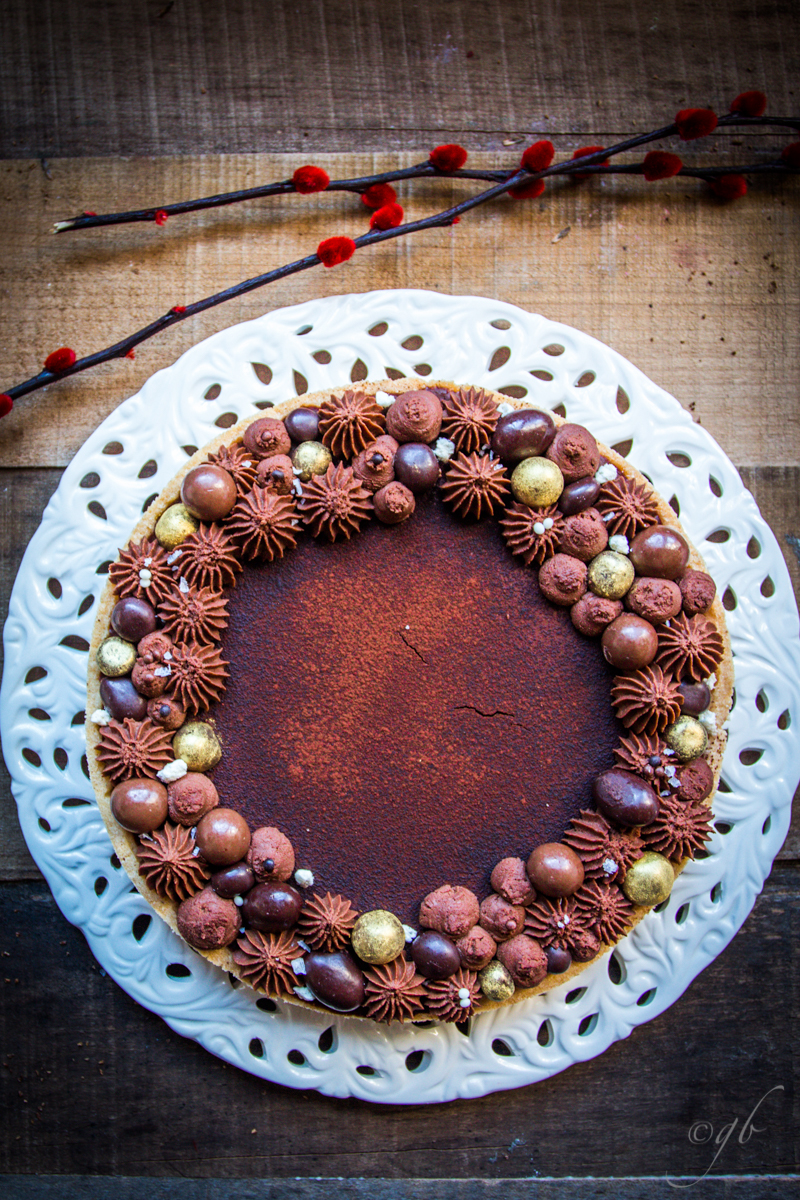 The dark chocolate tart originated from a mistake and in the baking world, on average, mistakes are expensive.

No, it’s not a failed attempt to replicate the dark chocolate tart of Martha Stewart and it’s even less the personal interpretation of Knamm’s chocolate tart.
I had decided to attempt a cake with a Madeleine biscuit base and passion fruit cream, covered with chocolate Chantilly. I was going to look after the 3D pink bunnies and the golden decorative mushrooms at a later stage, duly observing the classic “business before pleasure”.
Ok, I know, maybe you’re pulling a face because at first it may look like something thrown together and not living up to expectations…but honestly, it’s not the case.

Be brave, at the end of the day, widely known baking mistakes have given birth to memorable desserts which, to this day, remain mouth-watering. If you also believe that you messed up too many times in the kitchen, remember that the amazing Tarte Tatin was born from a tray that was put in the oven with just apples, sugar and butter. Let’s be honest, even the hospital menu can do better. However, the genius touch was not to lose hope and add on top the pâte brisée (pie crust pastry) before taking it out of the oven… “Vous savez, c’est mieux comme ça”, the French would say.

Or again, imagine how the chef of Emperor Franz Joseph of Austria felt, when he realised he had burnt the pancake he was preparing as dessert. The average person would, at the very minimum, drown in sweat, start shacking uncontrollably and lose 5 years of life, because back then you couldn’t just send the waiter and say “I am sorry but we run out of eggs…can we get you a glass on the house?” But obviously the chef belonged to a different breed, so he took that half burn, half broken pancake and he broke it completely, covered it with large amounts of powdered sugar to hide all ugliness and served it with slightly sour jam. The bearded Franz liked it so much that the dessert was called Kaiserschmarrn, “the emperor’s mishmash”…and he wasn’t the only one who liked it. Don’t even ask me how many I gobbled down when skiing, back when I was just a girl unaware of metabolism rates. And that’s not everything. Did you know that, mid-19th century, in a French kitchen, a young chef was called “ganache!” (fool) after pouring boiling cream into a bowl of chocolate?

I wonder what the chef would have barked at me if he had saw me beating a ganache straight out of the fridge…because this was my original sin.

Disappointed, that night I left everything and went to bed. The following morning, I tried again to blend that lumpy mixture, remembering the words of a chef from a course of basic pastry I once attended…”the emulsion! The emulsion!”, and the cream was domesticated once again. So I set aside my passion for pink bunnies and golden mushrooms, I got some raspberries, some pâte sucrée I had in the freezer, and I opened wide the doors of my imagination. 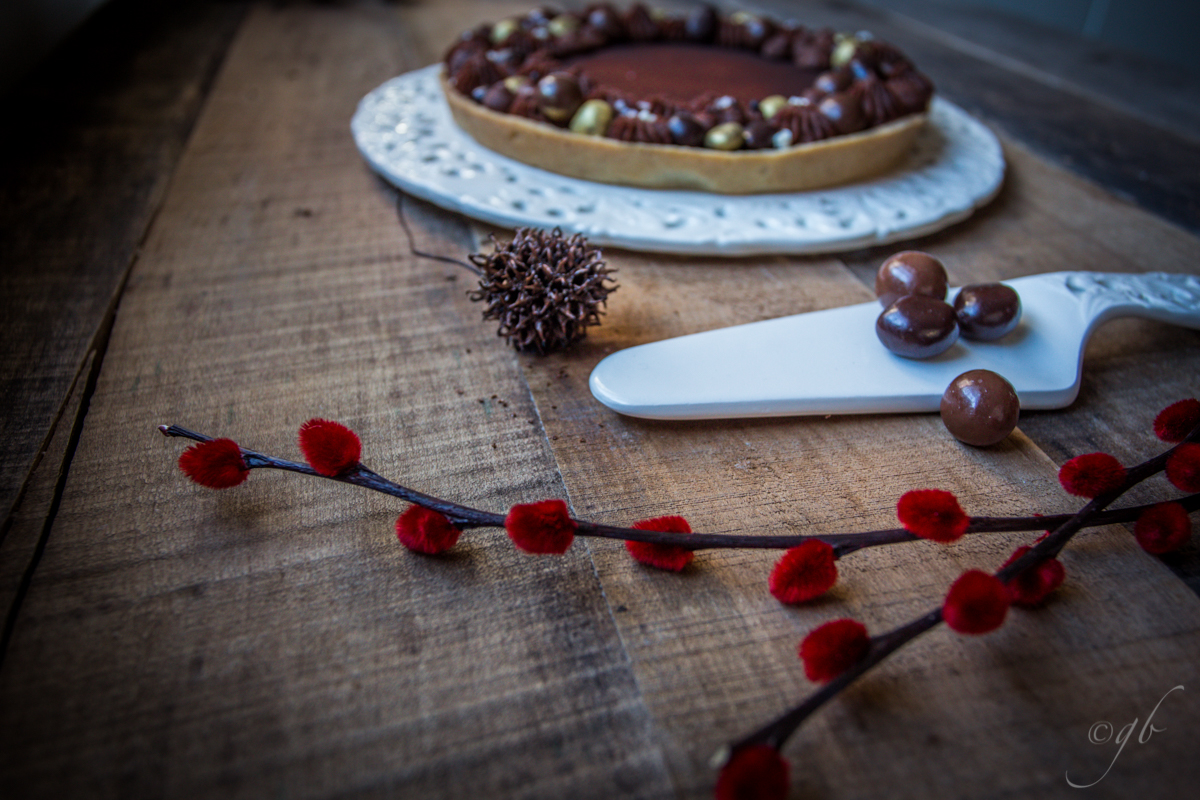 TIPS
for a an easy chocolate cake

1. If a mistake can avoid other mistakes…well, once you’ve made the ganache, use it straight away to fill the tart, or keep it for no more than a few hours at room temperature, but not in the fridge. If it gets harder, don’t despair: you can bring it back to the correct thickness by warming it up on the cooker (or in the microwave for a few seconds) and it’ll be creamy again.

2. Instead of the crème fraîche you can use 35% fat fresh cream.

3.The tart base can be prepared well in advance and frozen.

4. Keep the tart at room temperature or in the fridge if it’s very warm outside. Take it out of the fridge approximately 20 minutes before serving. 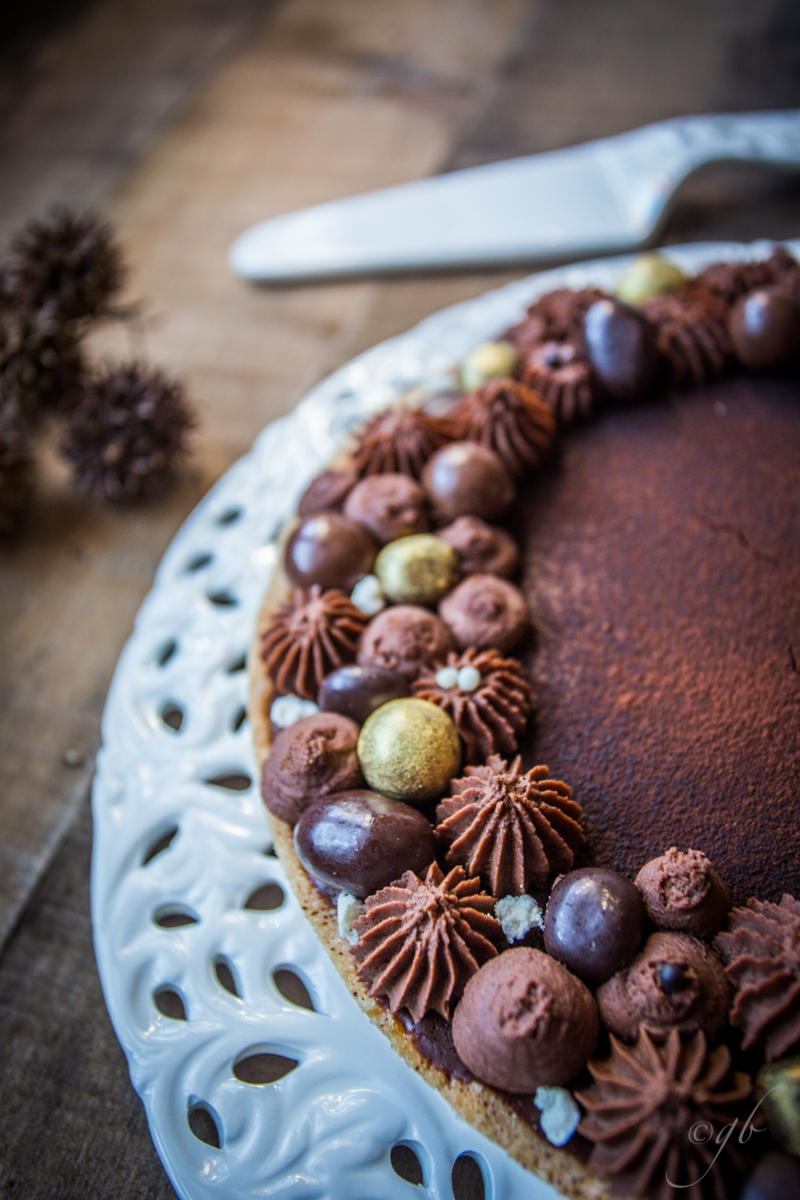 For the base – pâte sucrée beurrée

(to be made the night before)

In the kitchen machine bowl or in the food processor, add the butter, cut into chunks, and beat until softened.
Later add, in the following sequence:

Stop beating once a ball forms. You’ll get approximately 600 g dough, you’ll need about 350 g.
Wrap in cling film and refrigerate for at least 4 hours before using it.
You can freeze the rest and use it for other recipes.

On the day you’re making the tart, remove the dough from the fridge and roll it out between two sheets of parchment paper, lightly dusted with flour.
Make a 32 cm diameter circle and leave it to set in the fridge for another 30 minutes.

Line the tray with the silicone mat (or with baking paper) and place the ring (lightly greased with butter, the fat is a good heat conductor) over it. Leave it to set in the fridge or in the freezer for another hour.

Remove from the oven and let it cool on a rack.

For the dark chocolate ganache

Chop both types of chocolate in small pieces and put them into a large bowl. Boil the crème fraîche, then remove from the fire and pour 1/3 of it onto the chocolate. Leave to set for one minute, then mix with a spatula trying to incorporate as less air as possible. Add another 1/3 of the cream, mixing continuously, then the remaining cream. Keep mixing until the chocolate becomes thicker and shiny. Cover with cling film (so that it touches the ganache) and set aside in a cool environment, but not in the fridge (unless it’s for few minutes only). It should not get harder.

Place the base over a serving dish and cover with a thin layer of raspberry jam, using the back of a spoon. Add the raspberries on top of it and finally gently cover with a layer of chocolate ganache. Keep the remaining ganache.
Leave to set in the fridge for approximately 15/20 minutes (as long as it takes to the cream to become thicker and firm enough to the touch). Beat the remaining ganache with an electric whisk until it has the consistency typical of chantilly. If it’s difficult to beat, leave it in the fridge for a few minutes. Pour half of it into a piping bag with a star tip, and the remaining half into a piping bag with a plain round tip. Starting from the edge of the pie crust, create swirls, separated from one other (see picture). Roll the chocolate covered peanuts (or other chocolate-covered decoration) in the gold dust and carefully place them in the free spaces among the chocolate swirls. Cover any remaining spaces with the chocolate decorations and, if required, with the ganache in the piping bag with the plain round nozzle.

Decorate with a few fleur de sel crystals or pieces of meringue or hazelnuts.

-> For a more unusual effect, sift some unsweetened cocoa at the centre of the dark chocolate tart. 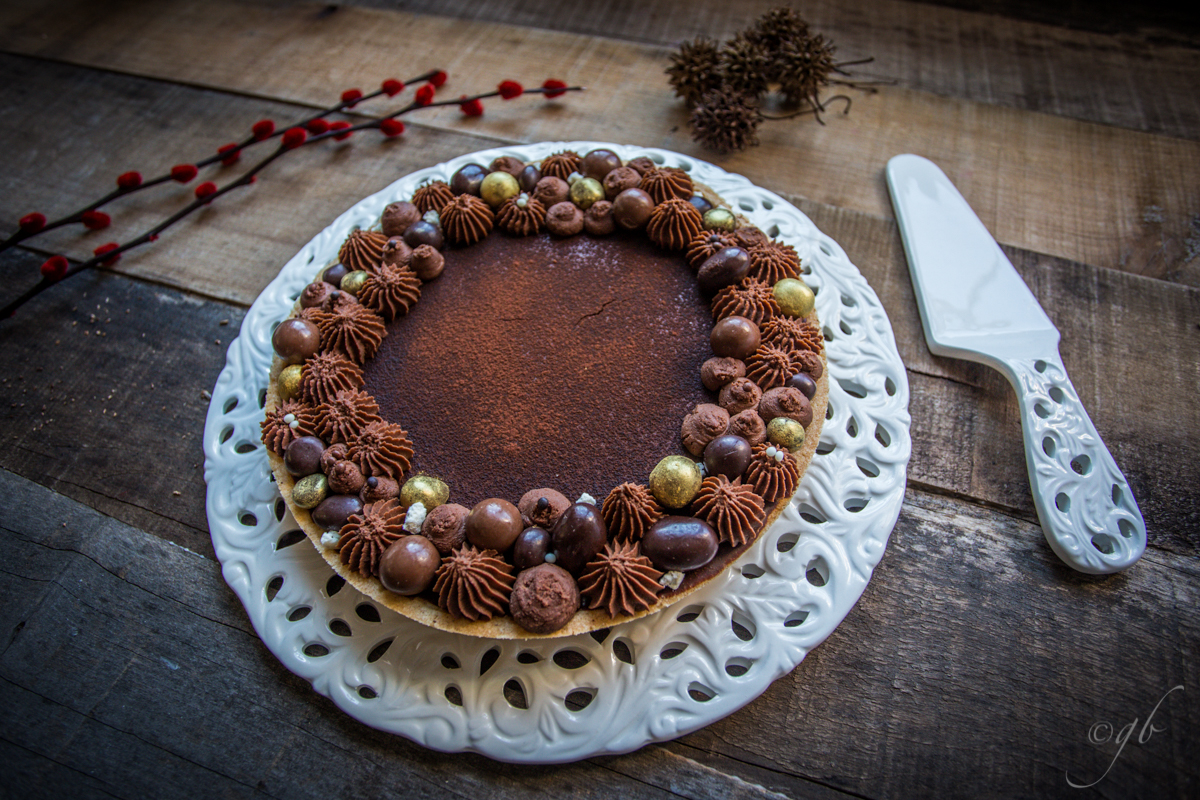 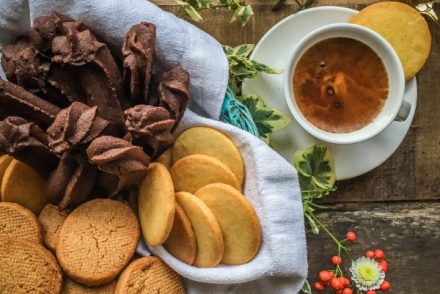 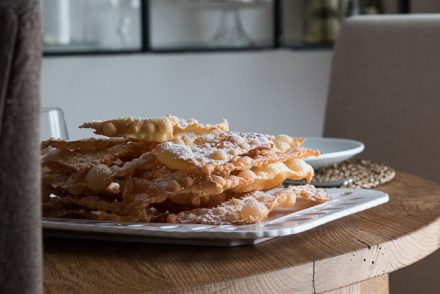 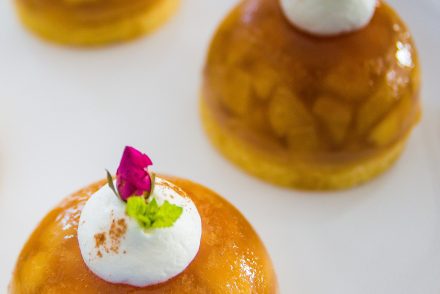